The Best Business Show, hosted by Anthony Pompliano – a well-known crypto investor and social media influencer has brought a 13-year-old NFT prodigy, Benyamin, the author of an NFT collection titled Weird Whales, back for another interview. Benyamin Ahmed, a 13-year-old from London, became famous for his smash hit NFT collection that raked in over $400,000 in profits for the young coder.
On the podcast, Benyamin revealed that Weird Whales is now looking at 2,000 ETH in sales volume. The young prodigy doesn’t seem to be satisfied with this kind of early success, however. He has also shared his new role as Web3 advisor on the Non-Fungible Films project headed by Hollywood actor Cameron Moulene. The project is centered around licensing other NFTs as intellectual property in order to make movies and TV shows based on these IPs. So far the project has managed to license NFHeroes and BAYC NFT collections, and is looking to add more NFTs to their list.

The crypto prodigy has also mentioned his involvement with Work in Fintech — a start-up co-founded by the former Head of Digital Products at Barclays, Ying Cao — namely its Corporate Sponsorship Scheme, which implies having corporations buy NFTs to fund young talent in the crypto space.

When asked about the current state of NFTs, Benyamin expressed his steadfast bullishness, saying that 99% of NFT use cases are yet to be discovered in the coming decade, and citing statistics, such as the continued growth of NFT trading volumes year-over-year.
During the interview, Benyamin revealed that he’s worth around one million dollars if he sold all his NFTs and crypto at a good enough price. Anthony Pompliano couldn’t help but repeatedly cheer for the youngster’s magnificent success, vowing to invest in his business, should he decide to create one. In the meantime, Pomp invited Benyamin to be a regular guest on the show every other week.

Since Benyamin Ahmed has already demonstrated his keen business acumen, we can only assume he’ll successfully leverage this opportunity to make a name for himself in the crypto space beyond just a one-hit wonder whiz kid.

You can watch the original video here. 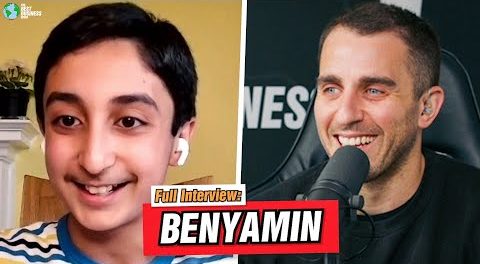