In the coming decade, many industries will likely experience a fundamental shift in the way they function thanks to blockchain technology, and the music industry is no exception. NFTs will transform the distribution of power between labels and musicians. Artists will finally be able to spread their music independently, without sharing their royalties with a label.

How do you make NFT music? Well, basically, just like any other track. The finished song or beat just needs to be turned into an NFT token and put on the NFT music marketplace.

The easiest way to do this is through OpenSea. You drop your track there just like any other media file, set the price and add additional privileges for buyers. When choosing the Polygon blockchain, a minimum fee of 2.5% is charged, and then it will be charged automatically when your NFT starts selling. There is no need to pay any gas fees when uploading an NFT to the platform.

Artists can send physical copies of their artwork to NFT buyers. You can create tokens that allow you to get a concert pass, an exclusive remix, in-person meetups with the artist, etc.

For instance, Justin Blau, better known by his stage name “3LAU,” celebrated the three-year anniversary of his album Ultraviolet by selling 33 non-fungible tokens. The most expensive token included a song written specifically for the buyer, as well as updated versions of 11 tracks from the album. The NFT buyer also received a physical vinyl record of the album. Over the last 40 minutes of the auction, the price of this NFT skyrocketed from $1 million to $11.7 million.

Artists can create rare digital art associated with the release of an album or a track. Die-hard fans and creative enthusiasts purchase NFTs for their private collection or for future resale. In turn, the owner of the NFT can earn royalties from each resale.

In the metaverse, you can have concerts with an audience so huge that it is pretty much impossible to imagine in the real world. Travis Scott’s virtual concert in the Fortnite metaverse, held in April 2020, gathered more than 12.3 million viewers online.  As millions of fans tuned in for this “astronomical” experience, an asteroid crashed into the ground, with Travis Scott emerging from the explosion, proceeding to dive underwater and then into outer space.

Concerts are held on virtual land plots, with advertising banners on-site, and the audience wearing digital clothes — all in the form of NFTs.

Smart contracts are the foundation of all NFT releases.  Musicians are, therefore, able to secure the rights to their digital work through them. Moreover, each release of an NFT track or album is tracked, as are all its buyers. This will help to avoid piracy and increase the potential profit of the artist.

The Gala games project has recently launched GALA Music, a platform where Snoop Dogg has recently dropped his first NFT album called B.O.D.R. For $5000 worth of GALA tokens, his fans could buy a Stash Box that contained an NFT of one of the songs from the album. Moreover, this way Snoop Dogg attracted the audience’s attention to NFT games, and the NFT game community was in turn drawn to the NFT music scene.

If an artist doesn’t have enough money to create a music video, NFTs come to the rescue! The video or parts of it (props, backstage footage, unreleased footage, etc.) can be released as NFTs. The Pussy Riot music video dropped on the Foundation platform was divided into 4 NFTs, with each token representing a certain snippet of the video.

NFT music art is the future of the industry, offering unlimited opportunities for artists’ creativity and allowing for independent profit. For fans, NFT music is the key to exclusive tracks of their favourite creators and a chance to feel closer to their work.

As you can see, there is quite a lot NFT have to offer to the music industry. That is not even to mention some more ‘experimental’ ways of using music in NFTs, such as fractional tokens (e.g. those sold on AsyncArt), where users can own separate elements of the track and choose which one is currently playing. The NFT field is still deep in its infancy, but it’s already offering much to take entertainment to an entirely new level — in ways never seen before. 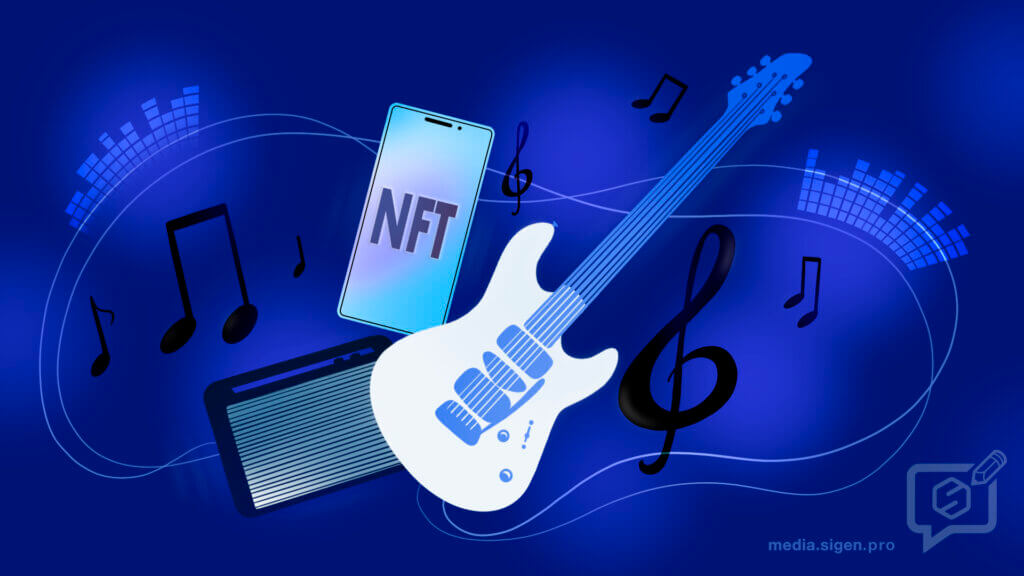 Articles
for beginners, for creators