According to WSJ sources, the NFT market is “collapsing,” despite others’ data demonstrating structural support. Who is precise in their estimation?

In the same week when the top five collections alone accounted for over $1 billion in primary and secondary sales, a Wall Street Journal article stated that sales of non-fungible tokens (NFTs) are “flatlining.”

According to data from Nonfungible, an NFT market analysis platform, on the information on which the article is based, the number of NFT sales has dropped by 92% since an all-time high in September 2021. Since a high in November 2021, wallets engaged in the Ethereum (ETH) NFT market are claimed to have dropped by 88%.

“The NFT market is collapsing,” the article concluded.

On-chain data from Dune Analytics’ dashboard, on the other hand, suggests that the NFT sector is still booming, with evidence indicating that the number of NFT users and transactions is substantially greater than Nonfungible claims.

The daily volume of Ethereum NFTs in US dollars has been among the biggest recorded since February, according to analytics.  Furthermore, the prominent NFT trading platform Open Sea had a volume of around 550 million dollars on May 1.

Sub-sectors within the NFT market are emerging and while some areas of the oversaturated market are in a downturn, others are seeing major gains.

According to the analytical platform Nansen, which divides collections into categories based on their market position, art and gaming NFTs lag well behind collections in the “Blue Chip” index. This category includes well-known and high-value NFT collections, like Bored Ape Yacht Club, Cool Cats, and VeeFriends.

The Nansen Blue Chip-10 Index, which tracks the top 10 NFT projects, is up 81% year to date (YTD), while the indexes tracking the top art and gaming NFT collections are down 39% and 49% YTD, respectively.

This pattern of NFT market money accumulating into the top collections was highlighted in an analysis by NFTstatistics.eth, who provided a graphic in late April showing the top 5 collections driving the Ethereum NFT market.

The Nonfungible chart also clearly indicates the spike in trade volume induced by the resonant release of the YugaLabs metaverse, the sale of land in which caused gas costs to skyrocket owing to the stress of the Ethereum blockchain. This situation is also difficult to declare the collapse of NFT Due to the May 1 event, the number of sales and active wallets has risen to values that the market has not seen since November 8, 2021.

It’s unclear why the Nonfungible statistics used by the WSJ are out of sync with Dune’s data, although it might be owing to Nonfungible’s inclusion of sales numbers from P2E game Axie Infinity. According to CryptoSlam statistics, volume for the popular play-to-earn touched an all-time high of over $40 million on November 4, 2021, before gradually declining to under $500,000 today.

But the collapse in popularity of a P2E game as NFTstatistics.eth says “is an extremely different message from ‘NFTs are collapsing.’”

While discussions of events taking place around the Ethereum network are not subsiding in the community, the second most popular Solana network is actively gaining popularity. The project on Solana Okay Bears overtook all Ether projects on the OpenSea about a week ago. 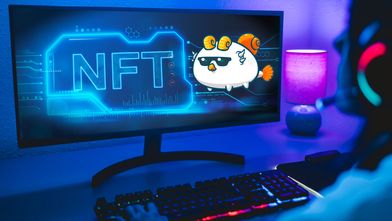