Cryptocurrency staking is a way to earn money by loaning out your cryptocurrency to a smart contract. It’s similar to a bank deposit: the user locks up their money on a platform and agrees not to use it (the money) for a set term while it generates passive income. The difference is that the transactions take place on the blockchain rather than in the banking system.

PoS (Proof of stake) is an algorithm used in staking. It’s one of the ways to protect the blockchain from invalid data and third-party interference. Users who choose a blockchain with PoS as the place to store their crypto, receive a reward.

Staking is fully capable of replacing mining. The most significant advantage of staking or PoS over mining is that the energy consumption in the former is drastically lower. Staking requires validators to only have an internet connection and the desired amount of cryptocurrency to stake; it doesn’t need any powerful computational hardware used by miners.

The user needs to determine how long they want to hold their assets in advance. You can often set your own term, but it cannot be changed later, nor can the coins be withdrawn before the term ends. With this type of staking, the income is fixed. Depending on the total number of coins that are locked for staking, the annual yield varies from 2 to 20%.

In this type of staking, the user doesn’t need to choose a fixed staking period. Coins can be withdrawn at any time, and interest will accrue until then. The reward starts to appear as early as 24 hours after you open a contract, but direct payments are made once a month (most often) or once every fortnight. Flexible staking is good for you if you have free cryptocurrency, but you don’t know exactly when you might need it.

In decentralised finance, there’s a third party between the user and the blockchain. This could be an organisation/platform/another user that takes coins from the owner at an interest. The execution of transactions is controlled by a smart contract. DeFi staking has the following advantages:

Interest payments are made every day and you can redeem your interest the day after you make a trade. For example, on Binance Earn, BNB Staking is available at 5.23% APY (Annual Percentage Yield) as of this writing. That means if you stake $100 worth of BNB, you’ll get ~$0,014 from that hundred already tomorrow.

Interest rates are higher and entry thresholds are lower. With conventional blockchains using PoS, it is difficult to earn more than 10% a year. By choosing DeFi, a user can expect returns of up to 100% per year, depending on the coin and term chosen. You can calculate the yield by using a staking calculator.

If you choose a reliable staking platform, the user is protected from fraud not only by the smart contracts but also by the credibility of the platform itself. Some of the most popular centralized platforms offering DeFi staking are Binance, Coinbase, Crypto.com, and others.

Now you have a general understanding of how cryptocurrency staking works. It’s worth mentioning that the main risk of staking is cryptocurrency volatility – your ultimate yield depends on changes in the price of the digital assets. Therefore, when choosing a coin, it’s important to look for low volatility. It’s better to hold a coin with a small and slow rise than one with sharp spikes. You may get lucky on a highly volatile coin, but there are high risks associated with staking it. If you want a stable passive income, it’s better to stick with stablecoins. 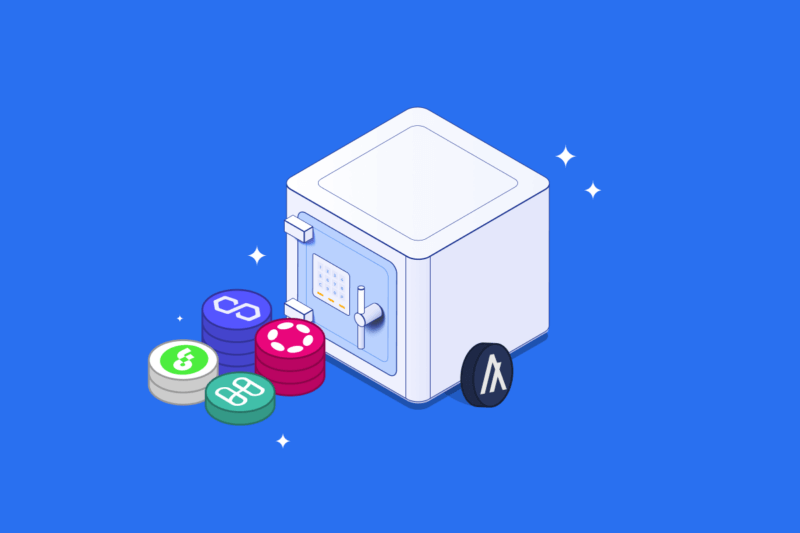